“To make an end is to make a beginning. The end is where we start from.”

Once upon a time, a girl decided to call herself Dr. Crazy and to create a blog to chronicle her experiences in a tenure-track job at a regional comprehensive university. She was new to the blogosphere, and she didn’t really know what she was getting into. She thought it would be an experiment in constructing a writing voice and a space in which she could talk about those experiences she was having on the tenure-track as a single woman without a partner or boyfriend or whatever. She at times felt like life as a professor was very different from what she had been led to expect it would be when she was a graduate student; she at times felt like the fact that she was a single woman marked her as invisible or different in ways that made people (colleagues, students) uncomfortable. She thought that the blog would work as a space to explore ideas related to these things, but she did not want it to be a diary. Rather, she constructed a voice that was brash, at times caustic, at times inappropriate. She did not want to perpetuate the weird language of promotion and tenure notebooks and letters of application. She wanted to talk not exactly as herself but nevertheless in a voice that was decidedly not her academic voice. She also wanted to keep her “real” identity secret. A pseudonym gave her, or so she thought, a certain measure of freedom.

A few weeks ago, I decided, after having considered the idea a number of times before, to end this experiment. Why abandon a blog that has developed something of a following? Why do this now? What am I trying to accomplish?

For a long time now, I’ve felt somewhat hemmed in by the space that I designed in the blogosphere. The pseudonym that was supposed to give me freedom in fact limited me: because of the voice that I had chosen for “Dr. Crazy,” and because of some of the things that I had chosen to write, I felt like I had to be very careful about what I revealed about my work. I had aimed, in the beginning, to compose a blog that allowed me to look at the personal and the professional in conjunction, but that was not what I’d achieved. What I’d achieved was the construction of a space, identity, and voice, that allowed for me to talk about personal life things but that ultimately stripped me of all authority (and of all ability to defend my positions) about the professional. I can’t write in a real or authentic way about my research or about the material I teach; I can’t write about anything specific about my intellectual life – not the book I’m reading before bed, in case I were to mention it in class or to a colleague, not the song I can’t get out of my head, etc. I’ve got to fabricate and embroider in ways that are obfuscating; I’ve got to be careful in a space that I imagined first as a space in which I could escape the pressure to be careful that I feel in my academic writing.

And so, toward the end of last semester, along came a troll. And at first I was really freaked out. This person seemed malicious. I considered how to respond. In that consideration, I also reread a lot of what I’ve written over the past year-and-a-half – early entries that don’t seem like anything I would write today. I also thought a lot about why I blog – what I’m trying to do with my blog and whether my blog was really doing what I wanted it to do. I thought about going on as if nothing had happened, but I didn’t feel comfortable with that. I thought about stopping blogging altogether, and that felt like a really fucked up “letting the terrorists win” sort of thing.

And then it occurred to me: the only reason I’m in this predicament is because I’ve been terrified of people knowing who I am. As much as I’ve dealt with my “real” identity being revealed to a few people, I’ve also been really afraid of the consequences of being a “real” person in the blogosphere. And so, I thought, maybe the solution is to come out – to just write under my “real” name, to tell people in my real life that I blog.

As I thought about it more, however, it seemed to me that to write under that name is no solution, ultimately, because it would limit my writing here in the opposite direction. I would, in a way that I had not been able to with the voice I had created before, be able to talk explicitly about my work. But I would feel like I would have to eliminate things like pictures of my cat and stories about nights out with friends or whatever. Why? Well, because ultimately a single girl who blogs about her cat or friends is judged in a way that, just to give an example, a man who writes about his children is not. And let’s say I go on the market in the coming year, and through the magic of googling this is the picture a search committee gets of me. And because my professional name is on the blog, the blog is seen as a professional document. I will not be evaluated positively. How do I know? Because I would not evaluate positively any candidate like me who had pictures of her cat on her professional website. With where I am in my career right now, I just feel like to write the kind of blog that I want to write under my professional name and as a professional document would be stupid. I also think there are issues of personal safety that a woman in my position needs to consider. Even if the blog would not be a detriment to me professionally, I’ve got to consider that anyone I begin dating will google me, and given the number of weirdos in the world, it doesn’t make sense to have extensive information about myself easily accessible under my “real life” name.

Ok, so then another option would be to just move house and to change my name – to go into the blogging witness protection program. That didn’t seem like a palatable option because it would mean having to rebuild everything I’ve done over the past year-and-a-half from scratch. Yes, I want a change of venue. Yes, I want to open up and to reinvent the content and tone of my blog, but I don’t want to start over in a community of which I’m already a part.

No, what I want is to move but to send a change-of-address. I like being Dr. Crazy, but I want to soften the persona and to expand the topics that I address on the blog. I want to construct a blogspace that I assume is public and that I assume is linked to my name in ways that people can easily access, but I also want to maintain pseudonymity to avoid being locked into a purely professional blog, which I fear is the only kind of blog appropriate for the non-tenured and/or single who don’t use a pseudonym.

I know I’ve said before that I’ve written the blog assuming people can find out who I am. That’s true, to an extent. I suppose it’s just that I feel now that if somebody is going to find out who I am I’d like them to see more parts of me – I’d like to perform a fuller identity online, if I’m going to perform one at all. And I’d like to feel free to talk about exactly what I’m working on and what I’m teaching and how I’m doing those things. On the Chronicles I don’t. Partly because of my own restrictions I’ve placed on this space; partly because of what I think readers expect from me. And so I’m moving house. If you’re interested, you should drop by. 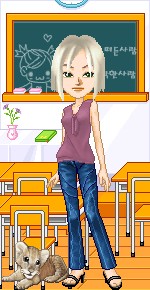